The paperback edition of Where the Oceans Meet published in 1998 by Seal Press. Click to buy it now. 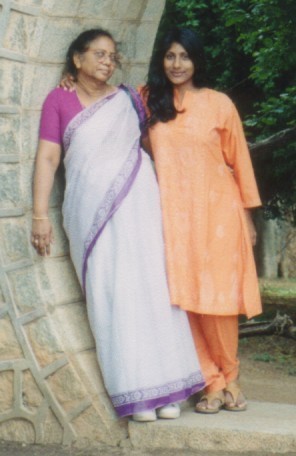 The author with her mother in Bangalore. 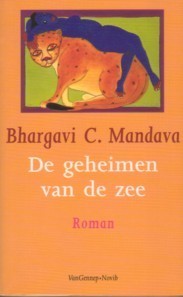 Where the Oceans Meet in Dutch published by Van Gennep. 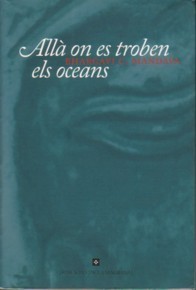 Where the Oceans Meet in Catalan published by Edicions de la Magrana.

Where the Oceans Meet

Where the Oceans Meet explores the rebirths of different souls within a single lifetime. Through 25 chapters we meet an array of Indian and Indian-American characters whose experiences are vastly different, but whose isolation and longing for a fuller life reveal a commonality among them.

After fixing the girl's dresses, Leeladhar finished marking the fabric for Navina's petticoats and jackets, as his grandfather was coming in to check over his work before they started cutting the cloth. Leeladhar rubbed the sweat and grease from the sides of his nose. It was a scorching day, and the fan was merely blowing hot air his way. The heat was making his head throb. Picking up the wedding saris, he settled in the back room in front of his sewing machine.
When he finally looked up from his work, Leeladhar saw the darkness of the street through the shop window. His grandfather had come and gone, raving all the while about the jacket patterns his grandson had come up with. After Basha helped him cut the cloth, he left whistling down the street with some of the fabric so he could start stitching the jackets at home. It was agreed that Leeladhar would work on the saris and petticoats in the shop. That must have been two hours ago, Leeladhar thought, as he still sat pedaling at his sewing machine. He had stitched the falls--a border of cloth stitched on the inside of saris to prevent them from getting dirty--for six out of the seven saris. He stood up and shook out the final sari--the one Mrs. Valuri was hesitant to buy. The pinkness pooled at his feet, inviting like a warm tongue. He felt the silkiness of the rich pallu that would be draped over Navina's strong shoulders and across her bosom. He breathed deeply into the fabric and swore he could already smell her scent there. At once, he dropped the sari. What was he doing? Why was he torturing himself like this? She was getting married not to him, but to another man! He wished the groom dead. And in the next second, he wished he hadn't wished that. His eyes started to tear from exhaustion.
He sat back down and began stitching the fall into place. His heart was racing, and his head filled with flashes of light. Why was it that he felt so many urges that he had to hold back? He remembered temple goddesses: curvaceous hips thrust forward, bellies exposed, plump breasts bared, nipples erect. Worship was torture. The human libido was not something to be ashamed of, yet he could feel the barbed manacles. Worse, he witnessed others who managed to break free. Most men's urges leaked out in the most perverse ways--pinching a tantalizing buttock, elbowing a breast in a festival crowd, touching a woman's knee or foot with their own while sitting on the bus, surreptitiously brushing a finger across a young girl's breast while handing her mother a box of sweets, ogling shamelessly. The balance of boldness and subtlety in the acts was always astounding. Mostly, they went unnoticed by passersby. But Leeladhar knew because he was always watching. He had many of the same thoughts as those men, except he never acted on them. As the rage shot through him, he stepped harder on the pedal. The fabric he was feeding into the machine bunched up as his fingers stumbled. The pain he felt as the needle pierced his fingertip brought him back to his senses. He gasped and pulled his hand away, clenching it to help stop the pain.
When he pulled out the bent needle from his sewing machine, he saw that his blood had fallen onto the sari. Panic and shame seized him, and his initial instinct was to scrub the spot clean--erase his foolish affections and forget the girl. But as he stared at the two beads of red, the bright rays of his love broke through and struck him. The plum shades of the border made the blood practically unnoticeable. He ran his finger lightly over the tops of the drops and watched as the thirsty silken threads drank him up.

About the Chapter Artwork

The drawings that begin each chapter are by Ms. Mandava's husband, artist Mark L. Sylbert. 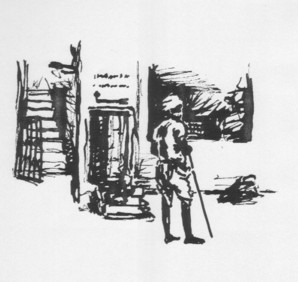 Both artist and author wanted to avoid literal interpretations of the stories, but instead, offer an introductory image to set place and mood of the book as a whole. 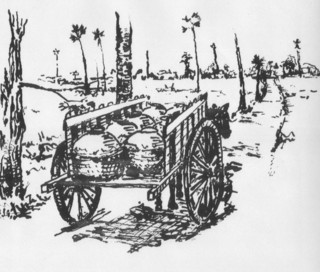 All the drawings were done in Sumi ink on paper with a reed pen. Photographs from the author's many trips throughout India were the reference source for most of the images. 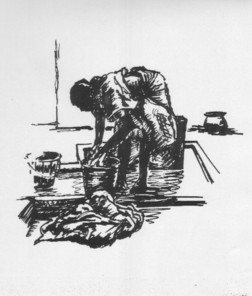 There are a total of eight images and each reappears at the beginning of particular chapters, subtly indicating a connection between characters and stories.