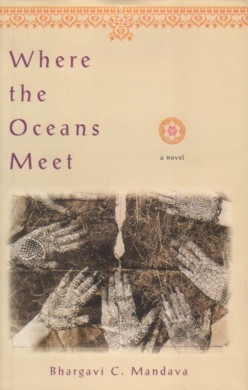 Ms. Mandava's debut novel was published in hardcover in November 1996. 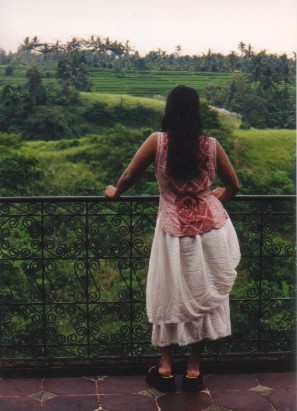 Where the Oceans Meet

"The protagonist in this unconventional debut is India itself, alive and pulsating with all its wild contradictions and bewitching charms.

Barely adhering to the confines of a novel, Mandava offers a number of largely autonomous plots linked by chance meetings and the hand of fate. Characters from two separate stories meet on the train in a third narrative strand; a character from one narrative benefits from the tragedy of a woman in another; the same cake is shared by a terrorist in one portion of the novel and a beggar girl in another. Beginning with Ravi, suffering from the mental anguish of his burn-scarred face, and of his attempts to woo the beautiful dancing girl Ana, the book swiftly picks up other lives along its propulsive way. Ravi, transformed, reemerges later as a holy man in a perceptive tale of a husband and wife, he a New Yorker, she an Indian-American on an awkward and revelatory vacation to her homeland. In perhaps the most distressing of the chapters, Navina, soon to enter into an arranged marriage with Ajay, a handsome doctor, is assaulted by the tailor of her wedding sari. In a rage at her ignorance of his love for her, the tailor splashes her face with acid. From this, a chain of loosely related events follows: We meet the young woman who is Ajay’s second choice for a bride, who sees a move to America as a move to modernity; we see the deeply conflicted Ajay in New York with his mistress Joanna; and we follow Ajay as he briefly encounters the taxi driver Vyshna, whose own story follows. Like most of the characters here, Vyshna faces the often difficult or baffling events of life with fortitude and grace.

Addictively interesting (and particularly sensitive to the status of women), the collective whole offers an absorbing glimpse into contemporary Indian life and its clash with encroaching Western culture."

"Mandava seemingly populates her laudable first novel with a colorful cast of thousands. While readers might often feel lost among the throng, Mandava helps them connect by providing her characters with tales of their own, unique strengths and weaknesses that make them stand out. Through characters like Kishore, who ekes out a living on the streets, and Divya, waiting for her arranged marriage to take her to the United States, we learn details of Indian food, clothing, mythology, and customs across several class lines, particularly with regard to the lives of women. This work engages readers in the world of southern Indians as well as first-generation Indian Americans. For those not acquainted with Indian terminology, there is a useful glossary. Highly recommended."
—Faye A. Chadwell, University of Oregon, Eugene

"Like the medieval tapestry textured with scenes of the human condition, Bhargavi Mandava’s debut novel, Where the Oceans Meet, due in bookstores this week, captures the complexity of the Indian experience through the fictional characters and visitors to the town of Vijayawada . . . Even the weather is a character as Mandava opens with an impending monsoon, and before it strikes, she delves into the lives of her characters and explores the continuum of human emotion that ranges from ecstasy to murder . . . Even though at first glance the novel, with the town of Vijayawada as its focal point, is reminiscent of the stories by R.K. Narayan, Mandava’s structure and interweaving of the characters set her apart. . . Through a closer reading, the stories reveal themselves to be in actuality elaborate vignettes and, given the strength she displays in her imagery and insight into character, she should attempt a more sustained narrative."
—Michel W. Potts

"Her vivid characterizations of men and women, whether in India or the U.S., capture our attention because they are carefully contextualized, and the author allows us to dwell on the interplay of race and class and gender without stridently forcing us to categorize these men and women as good or evil, but rather as people who respond forcefully to their difficult circumstances...The theme of unrequited love, of human passion ending in tragedy, violence, and suicidal rage weaves through many chapters of the novel, such as "The Lorry Driver," "The Tailor," and "Giving Birth." The entire novel brings us face to face with the complexity our characters face, and through Mandava’s skillful prose, we are able to understand their innermost feelings as human beings, pundits and beggars alike.”
—Jyotsna Sanzgiri, Dean of Organizational Psychology, California School of Professional Psychology

"Indeed, the unexpected and sometimes disconcerting pleasure of reading Mandava's first novel lies precisely where the stories meet and not in their compartmentalized entities apart from one another. In Where the Oceans Meet, the experience of difference--in the ethnic discourse of Asian Americans--lies in the avatar of details that allow the Indianness to continue from one story to another. As Mandava crosses borders with refreshing ease, she creates cultural authenticity with the help of objects that are inherent to her culture. Her stories are punctuated with fictive details from the Indian experience on a material level: saris, spices, sunlight, mirrors, lizards and on an abstract level: chaos, longing, exuberance, pathos. Such culture-laden details reappear to reconnect the vignettes in intricate spheres."
—Fawzia Ahmad, Professor of Gender and Cultural Perspectives on Third World Nations at University of Colorado, Boulder
Copyright 1999 The Society for the Study of the
Multi-Ethnic Literature of the United States