"...this anthology by Generation X women is both fascinating and provocative...Highly recommended for all collections."
—Library Journal

"Bless each of these writers for their smart, witty and honest examples of love, romance and power struggles, all of which prove that sweet fairytale weddings and seaside spiritual rituals are choices young women and men make today because of our feminism, rather than in spite of it."
—Amy Richards, Editor, Ms. magazine and co-author of Manifesta: Young Women, Feminism and the Future

"A refreshingly unorthodox and multicultural contribution to women's studies that will especially appeal to the postfeminist generation."
—Kirkus Reviews

"The freshest, hippest writers ever to slam Mattel's Barbie doll and speak up for the beauty of the un-blond, the un-tall, and the un-anorexic."
—Publisher's Weekly

Listen Up Voices, Voices From the Next Feminist Generation, Edited by Barbara Findlen, Seal Press, 1995, 2001. Click here to buy it now.

PRAISE FOR
LISTEN UP

"This is so real and so
wonderful: These hilarious/funky/fresh/brilliant/angry and crystalline new voices of 'the next feminist generation.'"
—June Jordan

In "A Suitable Union," Ms. Mandava describes the dilemmas and challenges she and her husband faced when they decided to get married.

When Mark and I decided to get married, we found ourselves whirling in a limitless corridor of symbolic and spiritual possibility, all of our options spread before us like our colorful library. The combination of Mark's atheistic upbringing and my polytheistic roots left us in a philosophical tangle. Up to this point, our religious investigations were speculative; the wedding would be our first big opportunity to put theory into some form of practice. What kind of ceremony would we both feel comfortable with? Should there be a ceremony at all? Should we skip the formal wedding and just have a huge party?

"To Apu, With Love" appears in Body Outlaws, Rewriting the Rules of Beauty and Body Image. This anthology was originally released as Adios, Barbie in 1998. Due to legal issues, it was re-released in 2000 with a new cover and the title Body Outlaws, Young Women Write About Body Image and Identity. "To Apu, With Love" was also recently reprinted in the 2nd edition of The Meanings of Dress.

In "To Apu, With Love," Ms. Mandava addresses body hair issues and the exotification of Indian women and culture.

Shortly after arriving in New York from Hyderabad, I remember skipping ecstatically behind my father as he carried a naked, used B&W Zenith through the streets of Astoria, Queens. Since it was before he learned how to drive, there was no old apple-red Impala the size of a boat just yet. And we couldn't afford to take a taxi--a rickshaw, certainly, but not a taxi. So, my father took an Atlaslike stance and up it went on his shoulders.
"Can you even see?" my mother asked him, nervously. "Careful, it's wet over there. Are you breathing?"
Her voice faded as I became lost in the appliance teetering above me. Soon, this innocuous gray box would become my saviour in a new country where I had no grandfather to tell me stories, no rickshaw drivers to take me for rides, no evening walks with my mother and sister to pluck jasmine blossoms for our hair. 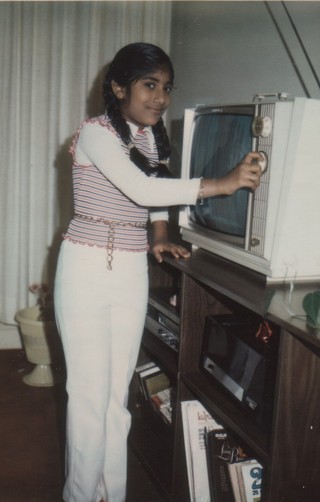 It didn't matter that the channel featuring "The Wonderful World of Disney" was a mess of lines and squiggles. At 4 years of age, I sat with my ear to the speaker, using the TV like a giant radio and listening to the tinkle of the magic dust spilling from Tinkerbell's wand. When I think about it now, I know it was a blessing in disguise that I had to fashion my own images of Snow-White and Sleeping Beauty.
One day, after a healthy dose of that wascally wabbit, I discovered NBC was coming in loudly and clearly. I was thrilled that I would finally put pictures to the words. Little did I know that fairy skin was a smooth and hairless alabaster and that fairy hair was blonde and perky.
And so marked the start of my re-education.

The essay "Ghosts and Goddesses" was published in the collection Listen Up, Voices from the Next Feminist Generation. Listen Up has been utilized extensively by women's studies programs in universities and colleges across the nation.

In "Ghosts and Goddesses," Ms. Mandava explores how her father's death when she was a teenager affected her views of Indian culture and her relationship with her mother.

Traveling all over India, I was bombarded with images of goddesses; the stomach-turning plight of the poor; and the rich mythology of my people. I devoured it all ravenously and my mother kept my plate piled high. I stared into the eyes of Parvati, the fierce goddess of courage after whom I was named, and felt an inextinguishable connection. But who was this woman who through numerous incarnations slayed demon after demon? Who was this woman who was as equally ravishing and gentle as she was brutal? "Parvati is the goddess of courage, creation and destruction; she is whom I named you after," explained my mother for the nth time. But this time it was different. This time I was really listening.